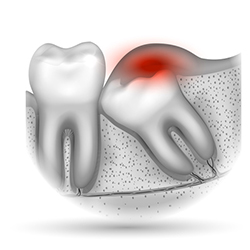 Also called third molars, wisdom teeth usually make their first appearance in young adults between the ages of 15 to 25. Because most mouths are too small for these four additional molars, an extraction procedure, sometimes immediately after they surface, is often necessary.

When should wisdom teeth be removed?
The following symptoms may indicate that the wisdom teeth have erupted and surfaced, and should be removed before they become impacted — meaning, the teeth have surfaced and have no room in the mouth to grow. However, each individual may experience symptoms differently. Symptoms may include:

Pain, infection in the mouth, facial swelling, and swelling of the gumline in the back of the mouth

Most oral health specialists will recommend an immediate removal of the wisdom teeth, as early removal will help to eliminate problems, such as an impacted tooth that destroys the second molar. According to the American Academy of General Dentistry, third molar impaction is the most prevalent medical developmental disorder.